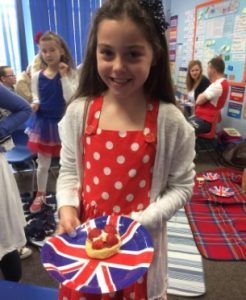 Thank you to everyone who made our celebration of the Queen’s 90th birthday a really special event in school. The weather and the unexpected fire alarm could not dampen our spirits and the day was a wonderful opportunity for families to eat and work together for the afternoon. Initially we were a little disappointed about the weather. All of the school staff had put a huge amount of effort into planning the day and our vision of pupils and their families eating on the school field, basking in some early summer sunshine, was washed away when we felt the first drops of rain at 11:15am. We were thinking of cancelling the event, but we realised that families had put a huge amount of effort into making packed lunches and picnic hampers so we knew we just had to change the location of the picnic.

Preparations for the event started long before Friday, with Miss Dixon planning the event from the end of May. On Saturday 1st of June two of our pupils got the opportunity to publicise the event by appearing on the BBC Tees Breakfast show, so we knew that a few people were planning to attend our event. Click on the link below to hear their appearance on BBC Tees. 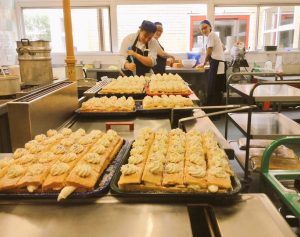 When it came to the big day and we realised that we could not get outside, changes had to be made. After tables and chairs were pushed away and picnic blankets were laid out in classrooms, we knew we had the next best thing: an indoor picnic. As soon as parents started to arrive at 12:30pm, we knew it was the right decision to stick with the picnic. It was wonderful to see parents, grandparents and friends coming into school with packed hampers, ready to share in our celebration. All classrooms were packed with our pupils and their families eagerly munching away on our specially prepared school packed lunches or the specially prepared picnics brought into school. 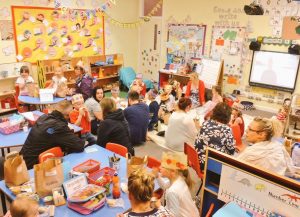 The thing that made this such a special occasion was that fact that that so many people were involved in this celebration, really showing the involvement our parents have with their child’s school. For us as a school it was really important that we took part in this celebration as it highlights how proud we are to be a school in England, which is part of the United Kingdom and the Commonwealth. Celebrating the Queen’s birthday allowed us to say we are proud of the fundamental British values we have as a school, the values exemplified by her Majesty the Queen: tolerance, mutual respect, value of the rule of law and democracy. As well as having a birthday party it was a great opportunity to say these values are important to us. 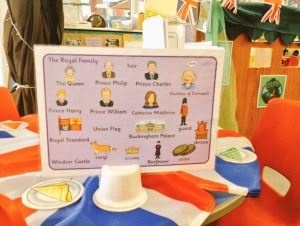 As well as a festive spirit, the afternoon was a great opportunity for all of our pupils, and their families, to learn about our Royal Family. Our teachers had set up a number of learning activities that everyone could take part in and these allowed everyone within school to learn a little bit more about our Queen. Pupils had also written letters to a number of people, including our governors, our local Member of Parliament and BBC Tees to invite people to take part in our community celebration. We were delighted that Anna Turley, our local MP, and Peter Baron, ex editor of the Northern Echo and presenter on BBC Tees, attended for the afternoon and were able to enjoy a packed lunch with our pupils and parents. 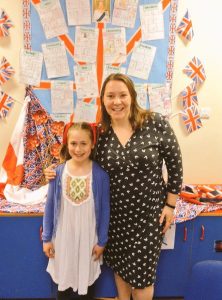 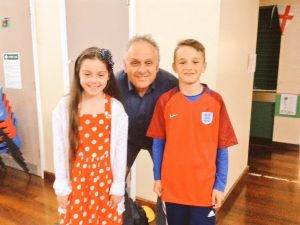 Peter has written a wonderful article in the Northern Echo about the afternoon, which really shows how enjoyable the who afternoon was for everyone. He also talked about his visit to school on his Saturday morning show on BBC Tees, including our singing of the National Anthem.

Oh and of course… the fire alarm. Nothing can make an already difficult situation more difficult, apart form adding a fire alarm that goes off just as everyone was sitting down with their hampers and packed lunches. Although this might be seen as an awful situation to happen in the middle of a packed school, it did show us that our evacuation procedures work and work well. Around three months ago we practised a fire alarm in the middle of dinner, to test how our pupils would react when they were not in classrooms. This practise, and the false alarm from Friday both worked well and demonstrated that in an emergency, our pupils know where to go and what to do. Some grandparents were telling me that they were standing still when the fire alarm went off, waiting to see if it would stop, when our pupils said, “Come on. We have to go outside.” 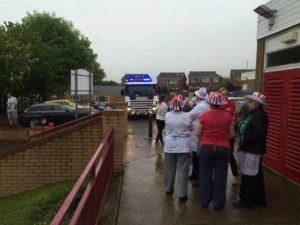 Thank you to everyone involved. It was a wonderful afternoon.